Loose coupling helps the decomposition of a system or application into independent components, by minimizing the dependencies of each component on the implementations of other components which it uses. SOA formalizes the component service interfaces and interaction protocols so that any individual component can be replaced by any other with similar functionality and the same service interface without compromising the correct behavior of the overall application. Component implementations and implementation changes are hidden from users of the provided services.

The benefit of loose coupling is that an application can be evolved incrementally, replacing individual component implementations one at a time with enhanced versions while preserving the correct behavior of the overall application at each step. Loose coupling as a concept can easily be extended to the use of Events. An event is an announcement of an interesting occurrence of a phenomenon. This idea then leads to a type of loose coupling we call “event coupling”.

The distinguishing characteristics of event coupling are:

Event coupling facilitates the smooth evolution of a family of applications, based on the event coupling characteristics described above.

How should a component announce notable occurrences so that other components can set themselves up to be informed when relevant items of interest have occurred?

Above is an event source components view of the forces at work. Consider the equally important forces as seen from the event consuming component’s viewpoint.

Consider a component with responsibility to assign corporate internal telephone numbers to newly hired employees. Does this component have to take responsibility to contact each Human Resources office to get information about new hires? For each employee this might require gathering information which became available at different times, and involve collecting this from a possibly varying set of Human Resources offices in the corporation. To bring all this information into the telephone numbering component and for analysis is inefficient; furthermore many other components need to be prompted with the same new hire event for other tasks such as: start paying salary, send welcoming mail package etc. There may be no single business process which understands everything which has to be done when a new employee is hired. Centralizing detection of notable events into an Event Backbone and making this event information available to interested components is much more efficient and allows for flexibility.

Hence we need a solution which supports definition of a mediating Event Backbone to which events can be reported and which supports subscriptions by components to pattern of events in which they are interested. Such an approach decreases event messaging traffic, increases the efficiency of event analysis, aggregation and correlation, and allows the dynamic introduction of new patterns of event information flow into a community of existing applications (without change to the existing applications).

We solve the problem described above by:

You see the interaction of these components in the diagram below: 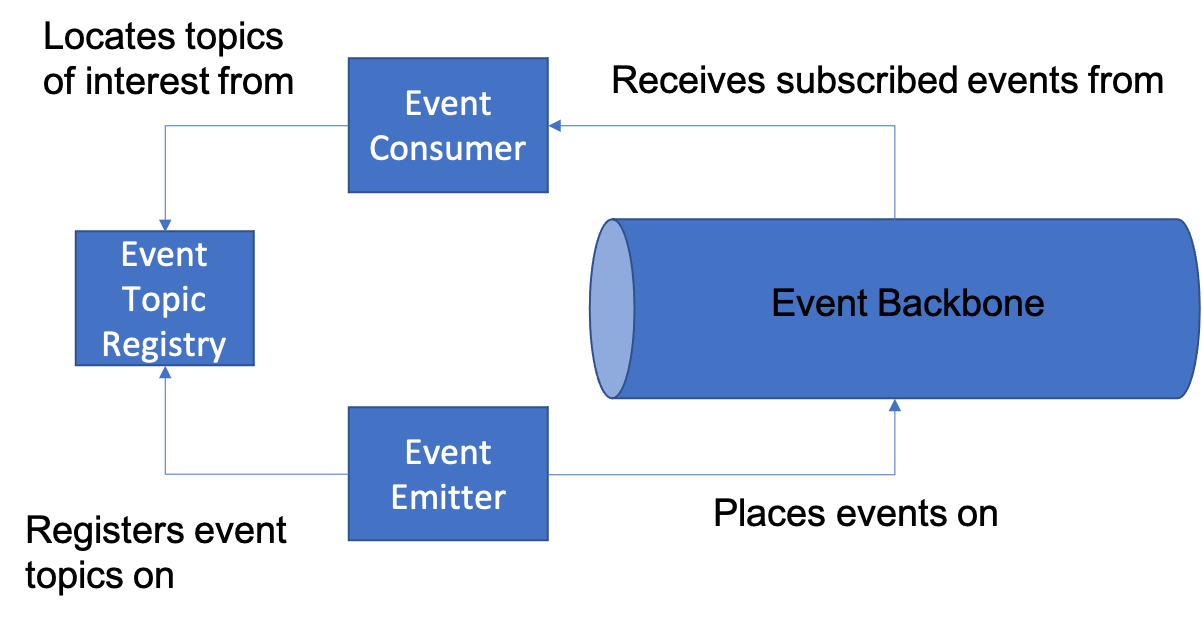 An Event-Driven Architecture extends loose coupling to event coupling in which because the targets are optional; the source announces the occurrence the same way whether the announcement goes to no, one, or multiple targets. It enables each target to receive the notification and decide how to react, if at all, such as which service to invoke.