(aka Extract Service and Add Façade)

You have Started Small, Paved the Road, and began using microservices as part of your implementation. You have a monolith that has been providing value to your organization, but has become hard to change. There is some functionality you want available as a microservice New client applications need to use functionality in the monolith but require a different contract.

How can we make monolith functionality available as microservices without affecting existing client applications that access the monolith?

The organization may have an API gateway or a similar application integration element available in their runtime infrastructure. However, this element is not currently being used to centralize calls to the monolith.

Extract functionality out of the monolith into microservices, add a façade to route calls and transform messages as needed.

Components are gradually extracted from the monolith and redesigned as microservices. Sometimes this is straightforward as there are components or services within the monolith that are not tightly coupled and can be extracted and wrapped as a microservice. If this is not the case, you might need to Replace as Microservice. Existing client applications or components that use services moved out of the monolith can be handled as follows:

Figure 8 illustrates the application of this pattern to component X. The component is extracted and becomes microservice X’. An API Gateway or similar application integration product is a good candidate for the implementation of the façade element. Another option is to use the Backend for Frontend (BFF) pattern to implement the façade logic. This approach is similar to the Wiping Your Feet at the Door pattern [10] and can be considered a type of an anti-corruption layer [11]. Note that façades are related to adapters, decorators, mediators, and proxies [13].

In addition to protocol bridging and message transformations, the façade component, which acts as a reverse proxy, can perform several operations, such as security controls, dynamic message routing, traffic monitoring, circuit breaker, and even caching. The figure below also shows that a new client application may also call microservice X’ directly, if the extra features of the façade just mentioned are not required for this interaction. 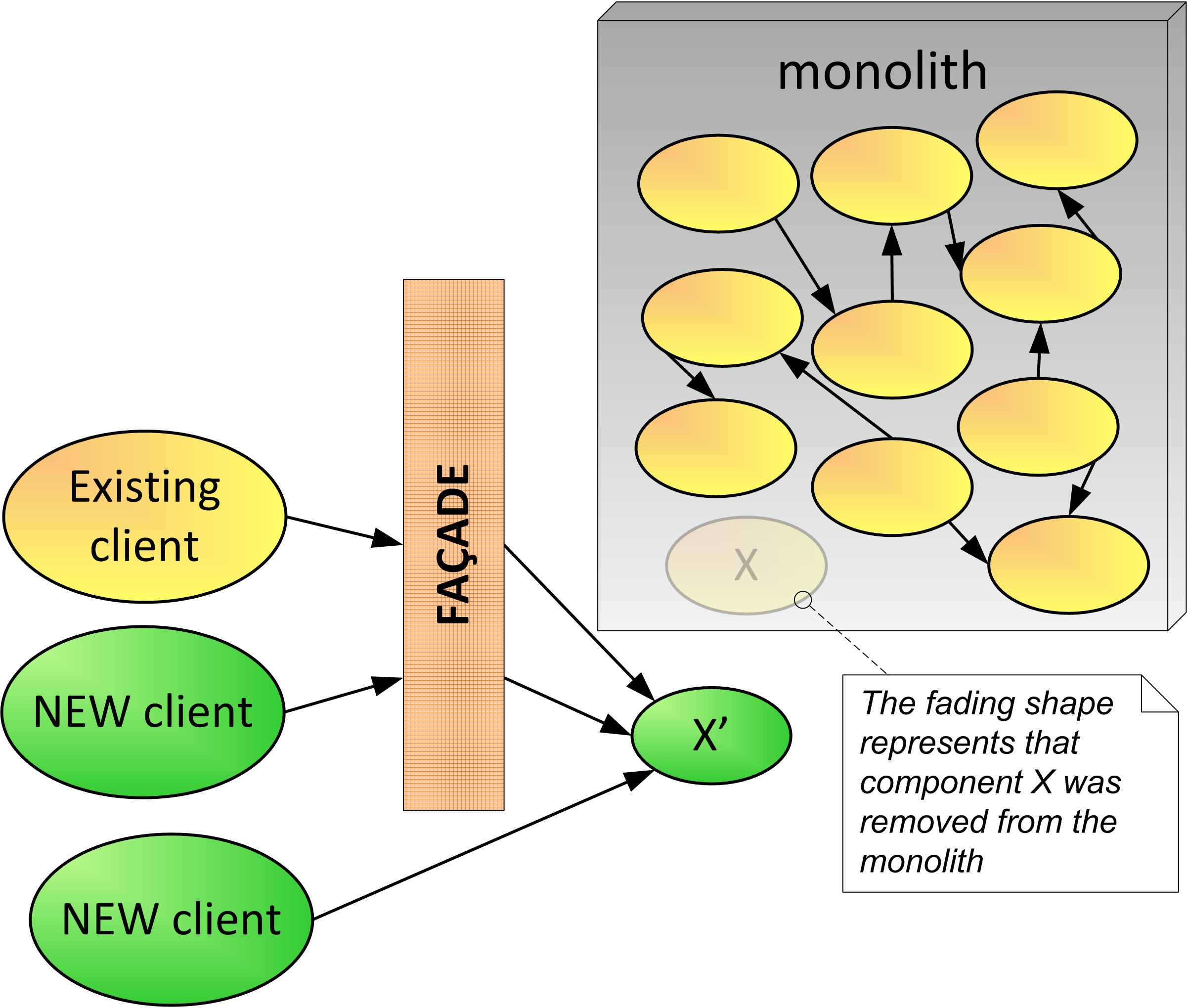 Note that in this example, X is decoupled from the rest of the monolith. Usually some detangling is needed to extract the component. If components inside the monolith were clients to X, then you can either adapt those clients to have them calling the new microservice X’ through the intercepting façade, or if possible adapt them to directly call X’. Alternatively, you could Proxy Monolith Components to Microservices, making X be a proxy to X’.

The façade component has the benefit of enabling existing clients to seamlessly interact with the newly created microservice. However, there are trade-offs to consider. The façade is an intermediary that introduces a performance overhead. If not properly designed and monitored, it may become a performance bottleneck and a single point of failure. Besides, its implementation may use platform-specific technology that generates coupling to a given framework or platform.