(aka Proxy Monolith Service to Microservice)

You have a monolith that has been providing value to your organization and parts of the system are becoming harder to change.

How can logic that was once in the monolith and is now implemented as microservices be accessible to existing and new client components?

Figure 9 illustrates the application of the pattern to components X and Y. The components are extracted and become microservices X’ and Y’. The diagram illustrates the fact that extracted services can be synchronous or asynchronous. For example: service Y’ can be a synchronous REST service, and service X’ can be a consumer of a message queue (e.g., a Kafka topic) and hence be activated by asynchronous messages or events. In this example Y is proxying directly to Y’, while X is proxying by sending a message to a queue that X’ subscribes to. 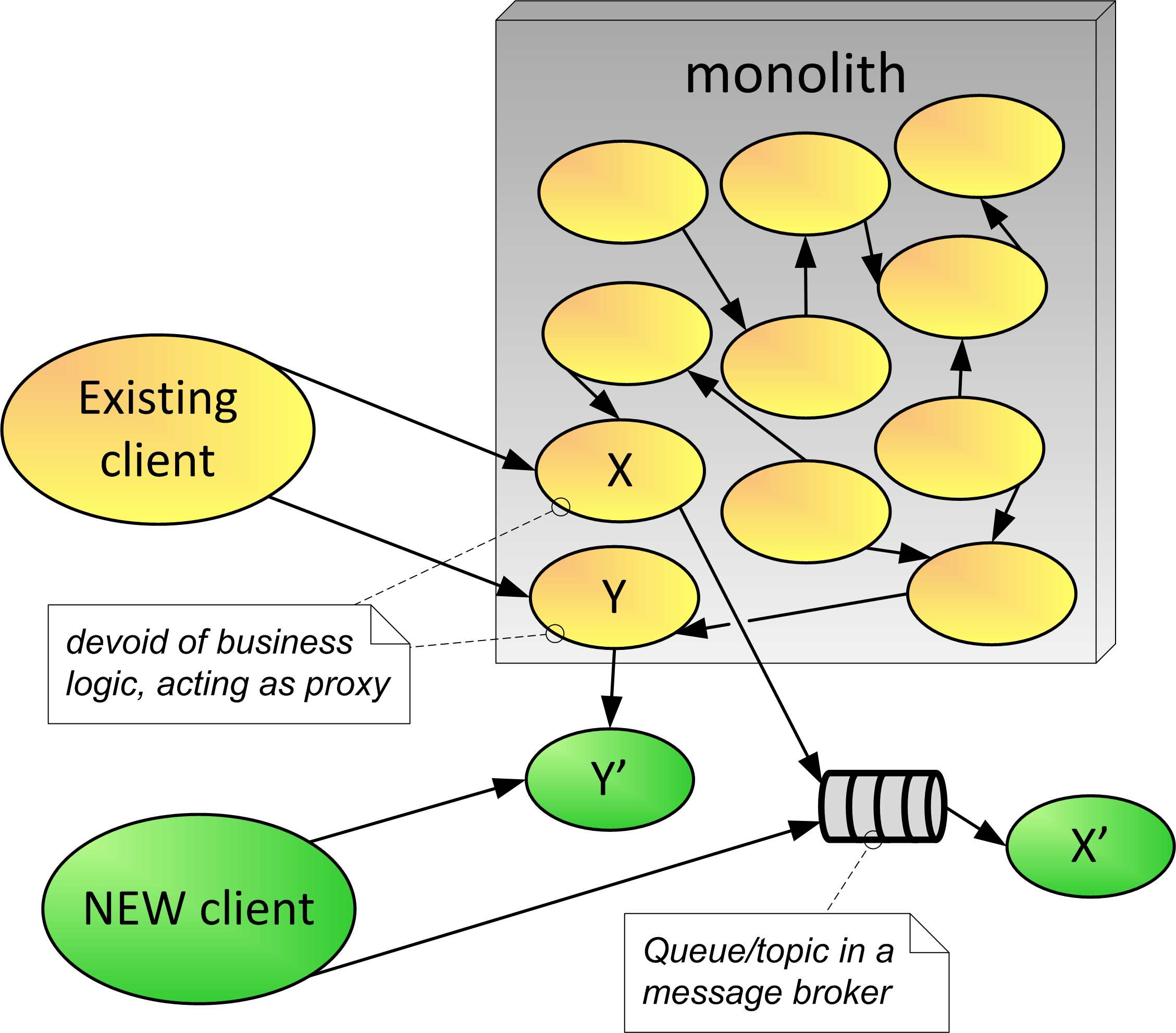 Whether you rewrite pieces in the monolith (Replace as Microservice) or Extract Components and Add Façade, if components in the monolith need access to the new microservices, it is common to Proxy Monolith Components to Microservices. There are possible failure scenarios inherent in distributed systems that must be dealt with when applying this pattern. These failures could compromise meeting the reliability and performance requirements of the system.

Unlike Extract Components and Add Façade, this pattern does not require creating, configuring, and monitoring a façade component to allow existing clients to seamlessly communicate with new microservices. Therefore, this pattern is in general easier to implement and govern than the previous one. However, similar to the solution with the façade, the performance overhead exists of an extra network hop.

This pattern requires rebuilding and redeploying the monolithic application whenever a component gets extracted as a microservice, which was not the case with the façade solution. The main benefit of this pattern over the façade solution is related to handling calls from within the monolith. Figure 9 shows that components X and Y are called by an existing outside client application and also by other components inside the monolith. These clients in the monolith are unaffected by the solution because they still see the same contract exposed by X and Y, even though the actual business logic got deferred to X’ and Y’. We don’t have that benefit with Extract Components and Add Façade. In that pattern, internal clients would need to be adapted to calling the new microservices, as the façade typically would not be intercepting the in-VM calls within the monolith.

This pattern is a variation of the traditional Proxy pattern [13] for distributed systems. In this case, the proxying components are also known as remote proxies or ambassadors.